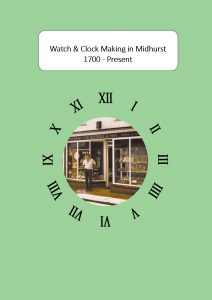 Clock and Watch Making has a long history. By the end of the 17th Century, English horologists were seen as the best in the world. It should be emphasised that few people made a clock or a watch from start to finish, rather dividing the labour and skillset up. Many of the names we see on dials from the 18th – 20th Centuries are the retailers names rather than those who made the movements. However those retailers were usually trained and apprenticed in the repair of clocks and watches, which could take up to 7 years to learn. Most towns and cities had more than one person skilled in the craft and Midhurst is no exception. We have been tracing the names of clock and watchmakers back to the 18th Century and this exhibition displays some of the stories of those who lived and worked here over the last 250 years.

Clock and watchmakers tended to congregate in certain areas of Midhurst.  West Street and Rumbolds Hill were the most popular locations but also North Street, Station Road now Bepton Road. The exhibition concentrates mainly on the clockmakers in West Street right up to the present day.

In most cases we know or believe they worked from the premises known as St Johns which is now occupied by J. E. Allnutt and Son. However the research is ongoing .

If anyone knows of others or can provide further information about those on this list we would be very grateful to hear from you.

Alternatively come in and talk to us either at Grange Road or West Street.

So far the earliest reference we can find to a watch or clockmaker is Samuel Jemmett, who was born in Eastbourne in 1693. In 1712, when he was 19, he was apprenticed to Samuel Hammond of Battle, East Sussex. Following this he moved to Catsfield (E. Sussex ) and then came to Midhurst in 1722. He died in 1769, leaving his business in the hands of his son Samuel (II). In turn his son, also called Samuel (III), took over the work in around 1795, although it is likely he worked alongside his father before that.

At around the same time as Samuel II & III were working The Roe family also appear in the records. Unusually for our Midhurst clockmakers who tended to live above their shops, it seems that they lived in Rumbolds Hill but their workshop was in West Street. Richard was there is the late 1700s according to Brian Loomes in his book “Watchmakers and Clockmaker’s of the World”. The local directories tell us that William Roe was working from at least 1839 if not earlier, until 1866. At 27 years this is the longest stint for a single clockmaker to have been continuously working in West Street. As with the rest of this voyage of discovery however, we are constantly finding more evidence to add to our knowledge of names, dates and places.

The next clockmaking family in West Street, presumably in the same premises, was that of Charles Wrapson and his wife Mary. Directories place them first in Red Lion Street, Midhurst in 1839 but by 1851 they had moved to West Street. One of their sons William, set up as a watch and clockmaker at 28 Rumbolds Hill, very close to William Roe’s house at number 31. One of their other sons Charles (II) stayed living and working with them in West Street. When Charles senior died it was his widow Mary who became the business head. We can see this in several directory entries until her death in 1866 where the business is under the name Mary Wrapson. Although we know Charles was a skilled watch and clockmaker, and will have shared the workload,  Mary is sited as the “Head” of the household in the  1861 census. Her profession is recorded as watchmaker – so it is likely she also undertook horological repairs and sales.

A longcase clock signed Charles Wrapson can be seen on display in the gallery of Midhurst Museum Too! Why not go and have a look.

Charles (II) continued the business until his death in 1876. By this time he had a couple boarding with him called George and Mary Ann Lawrence. Our research suggests that Mary Ann was formerly a Wrapson and so was related to Charles. George was a coach painter and while he was alive Mary Ann was only referred to as his wife. However he died in 1871 and following this, evidence emerges suggesting that she was also a trained watchmaker. Due to this we believe she inherited the business and continued working in West Street until sometime after 1891, when she was already 72. Throughout her time running the business Mary Ann seemed keen to emphasise her roles as head of the household, the mistress of the business and the watchmaker. The census states that she employed other watchmakers over the decades but they were recorded as “assistant” or “jobbing”, suggesting that she was the main watchmaker on the premises. Our research about Mary Ann is an on- going part of wider work about women in horology in the 18th and 19th centuries. Again, if anyone has any information about Mary Ann Lawrence, watchmaker of West Street, we would be very pleased to speak to you.

Mary Ann died in Easebourne in 1900, but by this time a new proprietor in West Street with another story, was emerging.

Joseph Charles Ketterer is first recorded being in the premises at West Street in 1899.  We don’t know what brought him to Midhurst but he may have been an assistant, a business colleague or a long time family acquaintance of the Wrapsons or Mary Ann. Whatever the relationship, Mary Ann dies in 1900 in Easeborne, leaving all her belongings to her niece, while Joseph acts as her executor. Joseph’s father was from Germany, but his mother was English. They settled in Frome, Somerset together and this is where Joseph was born. At 15 in 1881 he was still living with them but by 1891 he had moved to Chichester (Caledonian Road) and had married Fanny Millyard in 1890. He was practising as a watchmaker there at this time. It seemed they came to Midhurst in approximately 1894 and it is likely then that he took over the premises in West Street possibly, but not conclusively, from Mary Ann.  Joseph quickly became a stalwart of the town community. He held offices of responsibility as a member of the Parish Council and he was a director of the Midhurst Gas Company. He was a trustee of several local charities and a member of The Midhurst Town Trust. It seems he was also very well respected and well liked. As well as a watchmaker he was also an optician and jeweller and his work was highly regarded. Sadly this was not to last. With the beginning of World War 1 in July 1914, Joseph felt there was a change in attitude towards him due to his German parentage. At this time evidence suggests that Ketterer was under a lot of stress due to several problems both professional and personal. Tragically Joseph committed suicide in October 1914.

Despite these exceptionally difficult circumstances Joseph’s wife Fanny carried on looking after their daughter (who had an unspecified disability) and running the business. She managed to extend the lease on the premises for another 7 years until 1917 when Ernest Charles Bannister purchased the stock and lease for

Moving from London Road, Burgess Hill, East Sussex Ernest Charles Bannister held the qualification: ‘Fellow of the British Horological Institute’ (F.B.H.I.) His two sons Charles Joseph and Ernest James (known as Jimmy) both became qualified horologists both studying the B.H.I. syllabus under their father. By the 1930s the business was being run under the name E.C. Bannister and Son.

Charles Joseph married in 1932 and moved to Petersfield where he ran a watchmaker and jewellers with his wife.

When Ernest Charles died in 1948 Jimmy took over the business in West Street working until his death in 1956. His wife Doris continued to run the business until 1981. Although she concentrated on the retail side of the business, she did employ two watchmakers,  Thomas Smith (Smithy or Ticker) from 1949 and James Alliston during the 1970s.

As a teenager John worked in a plastics factory but soon found that he was allergic to the materials he had to work with.  In the early 1950s, responding to an advert he became an apprentice to watchmaker Joe Murray at 20 London Road, Tooting Junction SW17. The shop was called J Murray and Sons. Following his training both with during the job and at night school he became manager of Joe’s second shop in Addiscombe Road, Croydon for several years until moving on to work at J. W. Benson as a self-employed watchmaker. This was quite a tough environment and and it was piece work but taught John many new skills.

Wanting a change and a different experience John once again responded to an advert to work with Kingsway Stores in Nigeria on a temporary contract. This was followed by a job in Ghana before he had saved up enough to buy his first timing machine and enough watchmaker’s tools to set up his own workshop.

This was situated over Lambert’s Jewellers in Tooting (near The Castle Pub) . In 1965 he became a Craft Member of the British Horological Institute C.M.B.H.I.

Eventually in the late 1960s he opened up his own shop in Upper Tooting Road, Tooting Beck

When the lease came to an end, a sales rep mentioned there was another leasehold available in the Sussex town of Midhurst. John arrived with his family in 1981 taking over from the long established Bannister and Son.  He worked here until his retirement in 2001 building on the work of his predecessors selling clocks and watches and doing the horological repairs, living above the premises.

John’s son Geoff started his watchmaking career working alongside his father, John when he was 14. At 16 he left Midhurst and studied horology in London for three years at Hackney Technical College passing the final grade of the British Horological Institute exams with merit in 1985. He then embarked on the famous WOSTEP (Watchmakers of Switzerland Training and Education Program) course in Neuchatel Switzerland studying under master watchmaker Antoine Simonin. Upon his return to the UK he re – joined the family business and for the past thirty years he has successfully developed the vintage watch restoration and sales side of the company (littlecogs.com). Geoff’s sister, joined in 1992 and continues to manage the jewellery section, a mixture of contemporary, vintage and antique 18ct gold and silver pieces.

Following Johns retirement, Geoff took over the running of the business and refurbished the shop. For the last four years he has been an advisor to tutors and students on the clocks programme at near by West Dean College (westdean.org.uk). Despite there still being a demand for skilled clock and watchmakers, this profession has been highlighted as one of our “endangered crafts” by the Heritage Crafts Association (see heritagecrafts.org.uk/the-radcliffe-red-list-of-endangered-crafts) Therefore Geoff is also working with others in the field to establish a formal Watchmaker’s Apprentice Scheme to ensure the knowledge and technical skills are passed on.

In October 2017 he began a dedicated Clock and Scientific Instruments shop (allnuttclocks.com) He now employs a team of 6 including his former apprentice Jacob Russell who trained with him for five years from the age of 16.