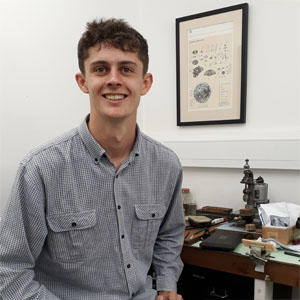 Following the amazing success of his first apprentice, Jacob Russell FBHI who qualified as the youngest watchmaker in Britain in 2016, Geoff Allnutt, J E Allnutt & Son Limited has recently taken on another young apprentice, Patrick Woodward.

Patrick initially approached Geoff in November 2017, after reading an article about Jacob’s success in the local press, about the possibility of an apprenticeship with J E Allnutt & Son Limited in Midhurst. He initially came in on a trial basis one day a week whilst also continuing for several months with his full time employment in micro electronics. He had approached over 30 companies, most of which did not even respond to his numerous requests for employment. Geoff saw great potential in Patrick and he offered him a full time apprenticeship in watchmaking in April 2018.

Patrick is now nearing the end of his 4-year apprenticeship at J E Allnutt’s & Son. Having completed his second- and third-year exams in November he will now work towards his final year portfolio which will focus on complex restoration of wrist and pocket watches. The work he is undertaking includes balance staff making, re-pivoting and watch jewel making. These are the necessary skills for the restoration that we undertake in our workshop.